As long-time resident Harriette McCauley quipped, “wherever the African-American churches were, that’s where they were.” But in many ways, the opposite was also true. Churches were attracted to set up shop in thriving black communities, and communities often sprung up with a church at their center. Going to church was not only about finding spiritual guidance, but also socializing with family and friends.  They also became (and remain today) an important site for organizing politically against oppression, and in many cases were able to provide a social safety net for people who were struggling. Santa Monica has had several important historically African-American churches that are still vital forces in the community today, and began very early in the city’s history.

The earliest of these churches was the Colored Methodist Episcopal Church (now the Christian Methodist Episcopal Church), which was officially founded in 1908. A small group began meeting in Hull’s Hall at Fourth and Bay Streets in 1906 under the guidance of Bishop Charles H. Phillips, and later moved to their permanent home in Phillips Chapel at 2001 Fourth Street. Its first pastor was the Reverend James A. Stout. (1) As historian Alison Rose Jefferson describes:

This was the first building for Phillips Chapel and the CME Church denomination west of Texas…The earliest African American community was clustered around Fourth and Bay with the Phillips Chapel Christian Methodist Episcopal Church as its spiritual and institutional center. The building itself was originally the Washington School, located at Fourth and Ashland Streets. After fire damaged the school in 1908, it was bought and moved to Fourth and Bay, where it was reborn as the first African American house of worship in Santa Monica. The Chapel has 11 stained glass windows commemorating some of the prominent families who attended the church. In 2005, Phillips Chapel was designated as a city of Santa Monica landmark. (2)

The CME Church played an enormous role in the social and cultural life of Santa Monica’s black community, as it was one of the few places that African-Americans were allowed to freely gather. It underwent a substantial renovation in the 1940s, and celebrated its 100th anniversary as a church community in 2006. (3)

This is not the only church with a long history in the city. Feeling the need for a Baptist Church in the growing Santa Monica black community, a small group of African Americans met at a home on 17th and Broadway on August 3, 1920. A week later, they celebrated the first worship service of Calvary Baptist Church, and since then the church has grown in influence and importance, particularly for the community in the inland Pico Neighborhood of Santa Monica. (4)

Reverend Lemeul “Mock” Mossett, III is the current Senior Pastor at the Church, and will oversee the celebrations for Calvary Baptist’s 100th Anniversary in 2020.

Not long after Calvary Baptist was founded, the African American community in Santa Monica had grown large enough to sustain another church, the First African Methodist Episcopal Church, Santa Monica, also known as First AME Church By the Sea. Founded in 1923, its congregation grew at a point when Santa Monica was still considered a welcoming environment for African Americans. As Paula Scott writes, “While racial discrimination was never absent from Southern California, the area was relatively hospitable to African Americans in the years around 1900 until the 1920s. Aware of this fact, many came looking for a better life.” The ubiquity of AME churches across the American South at the time made First AME By the Sea a natural landing point for many African American migrants to Southern California. (6)

The current pastor is Rev. Reuben W. Ford, and the church has flourished as a hub for community resilience, unity, and health and wellness. They continue to create programs for their diverse, regional community, many of whom (like all the black churches in Santa Monica), remain part of the congregation despite no longer residing in Santa Monica.

Long time resident Harriette McCauley shares her memories growing up in Santa Monica. She highlights the prominence of Methodist, Baptist, and Holiness churches in her family’s life, stating that “wherever the African-American churches were, that’s where they were”. (from 18th Street Arts Centers Culture Mapping 90404 Oral History Initiative)

Carolyne Edwards, long time resident and Quinn Research Center’s founder and archivist, describes what it was like to grow up in Santa Monica in the 1940’s. She was born and baptized at the First African Methodist Episcopal Church, also known as First AME by the Sea. Her grandfather, Alfred K. Quinn, was a minister there from 1936 to 1944. She remembers there being “a close-knit community” in that everyone knew each other. She notes that although much of the community has moved away from the area or the city, First AME church “pulls together a lot of these people”. (from 18th Street Arts Centers Culture Mapping 90404 Oral History Initiative) 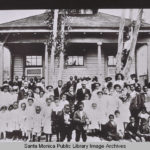